Today our shopping on the internet idea is a great book. 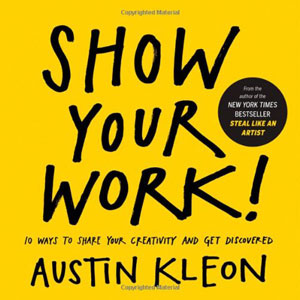 Show Your Work!: 10 Ways to Share Your Creativity and Get Discovered, by Austin Kleon

“Show Your Work!” is about why generosity trumps genius. It’s about getting findable, about using the network instead of wasting time “networking.” It’s not self-promotion, it’s self-discovery–let others into your process, then let them steal from you. Filled with illustrations, quotes, stories, and examples, “Show Your Work!” offers 10 transformative rules for being open, generous, brave, productive.

About the Author: Austin Kleon is a writer who draws. He is also the author of the New York Times bestsellers “Steal Like An Artist.” His work has been featured on NPR’s Morning Edition, PBS Newshour, and in the New York Times and Wall Street Journal. The Atlantic called him “positively one of the most interesting people on the Internet.” He speaks frequently about creativity in the digital age for organizations such as Pixar, Google, SXSW, TEDx, and The Economist.